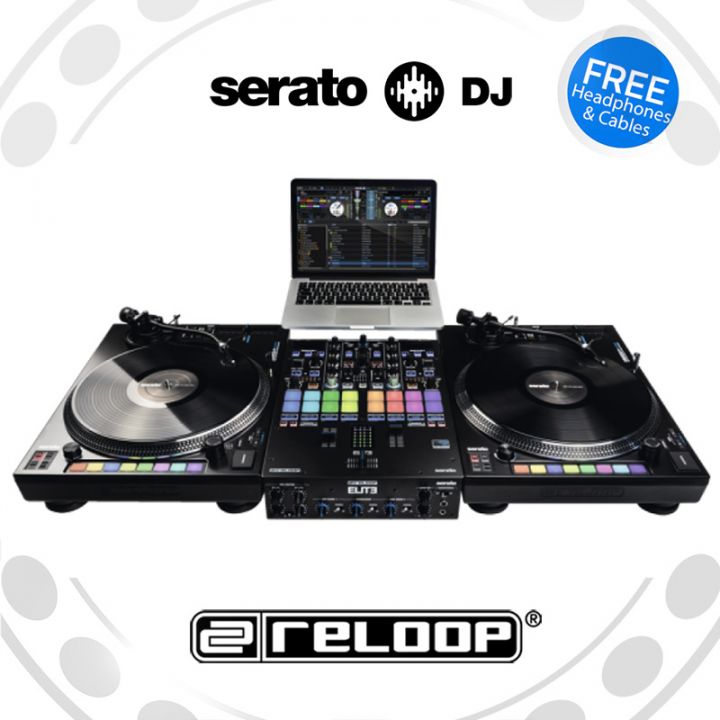 This Reloop equipment package includes two RP-8000Mk2 digital DJ turntables alongside an Elite 2-channel DJ battle mixer. This next-generation DJ equipment bundle provides you with a wealth of creative manipulation controls that will allow you to perform with creativity and flair. This package is perfect for scratch, battle, and performance DJs looking to take their performances to the next level using an array of high-quality, super-intuitive manipulative tools.

This turntable also comes with all the controls you’d expect from a turntable, all updated with improved technologies and an enhanced feel. Three motor speeds offer 33 1/3, 45, and 78 RPM while dedicated buttons for forward and reverse modes allow the platter to spin in both directions. A newly developed aluminium LED target light lets you easily find the stylus positioning in dark surroundings. A small LC display shows essential information such as pitch, BPM, deck assignment, scales, notes, elapsed and remaining time, and firmware settings. The torque can be fully adjusted from 2.8kg/cm to 4.5kg/cm making this turntable exceptionally smooth while the brake speed can be adjusted anywhere between 0.2 to 6 seconds.
The RP-8000Mk2 is one of the most advanced turntables available and was developed in close collaboration with some of the world’s top turntable artists. Eight RGB backlit performance pads and seamless integration with Serato DJ Pro gives you the ability to control several different performance modes including Hot Cues, Samples, Saved Loops, Pitch Play, Loops, Loop Rolls, Beat Slicer, and two customisable user-assignable modes. There is also a unique Platter Play mode that uses the pads to control the platter’s rotation speed; this gives you the ability to access 22 scales and 34 notes with the option to add nine user-assignable scales.

The Elite is a professional 2-channel DVS battle mixer which has also been developed in close collaboration with the world’s top turntable artists. A combination of a performance-orientated layout and powerful manipulation tools lets you take your performances to the next level. Sixteen extra large RGB performance pads are allowing you to control 12 performance modes directly from the mixer itself and include two user-assignable modes for your own preferred style. Two FX sections offer unrivaled effects possibilities. FX can be used in trigger mode, by holding the button, or the traditional toggle on/off while a new high-resolution mini fader lets you set the effect’s intensity. Both channels are also fitted with a Tweak FX with five available FX for you to switch between and includes a Filter, Bit Crusher, Flanger, White Noise, and a user-defined mode for customisation.

The two channels come equipped with a 3-band isolator EQ with a full kill function that completely kills a frequency band allowing you to harmonically mix between your tracks with precision. Two headphone outputs offer a 3.5mm and a 6.3mm Jack ports and features independent controls for volume and mix as well as a cue fader that lets you get the perfect balance between your cue’d and playing tracks. A microphone/line input is equipped with a 2-band EQ, a talk-over function, and an independent echo effect. The Elite is fitted with a powerful dual 10 in/out USB 2.0 audio interface as well as top-of-the-line audio architecture giving you an excellent, high-quality sound in 24-bit resolution. Dual USB ports mean you can connect two computers to the mixer simultaneously for seamless transition between DJs.