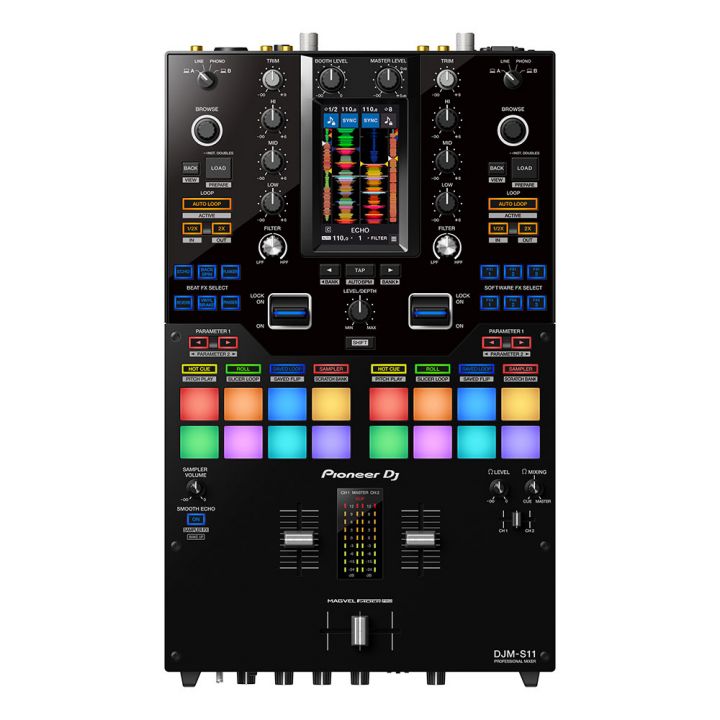 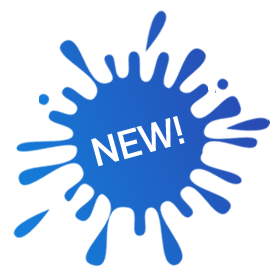 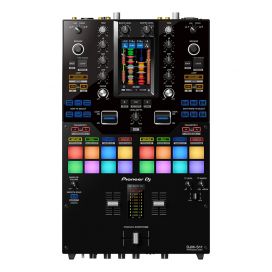 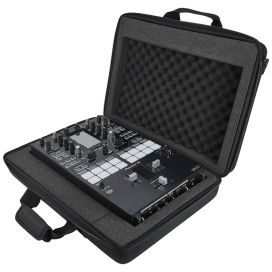 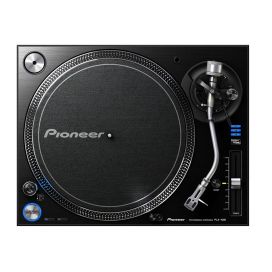 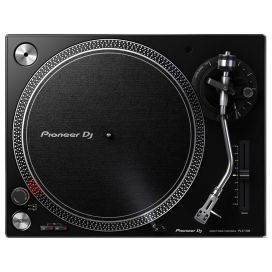 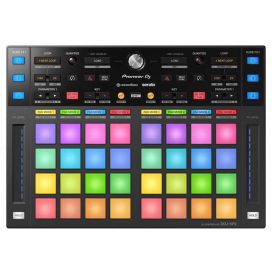 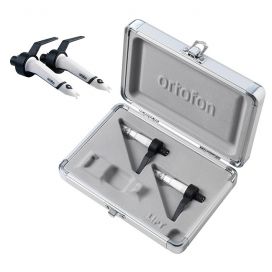 The mixer now has a 4.3-inch touch screen that displays all the information you would need at a glance, including track info, playback positions, waveforms and browsing functionality. There is even the ability to move your finger across the Touch FX screen to modify the texture of the music and use Touch MIDI to initiate functions within the DJ software. 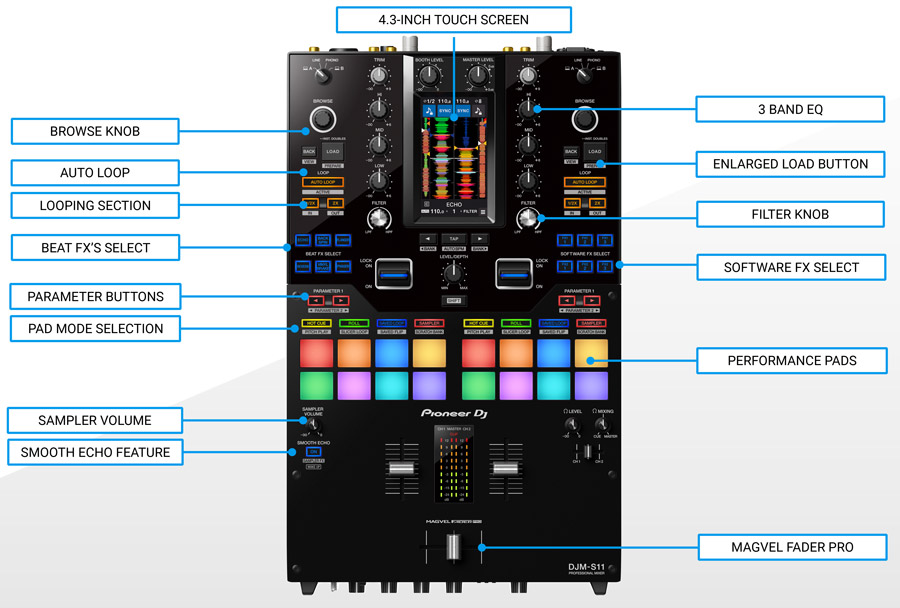 To entice an excellent crowd reaction or battle placement, the DJMS11 allows up to four tracks to be played simultaneously using the world’s first Deck 3/4 Control. On the touch screen, the added decks are displayed along with a range of controls which allows the browsing of tracks, loading of tracks, setting loops, triggering Hot Cues, modifying EQs and more. With Serato DJ Pro you can go one step further and use Deck Mover to move tracks from deck 1 to 4 and deck 2 to 3 without even having to break the music. This is an excellent feature for freeing up the main decks in preparation for subsequent tracks. When Dual Deck control is turned on it allows one fader, knob or control to operate tracks in decks 1 and 3 or 2 and 4; splendid for scratching two decks at once, adjusting the volume or adding effects.

There is a noticeable difference in the look of the S11 to its predecessor the DJM-S9, along with the feel. This is down to some enhancements that have been made including larger performance pads, a strengthened Magvel Fader Pro which provides more stability when scratching and improved sound quality that produces powerful, clear audio. There are also some notable new features which included an industry first Smooth Echo and aforementioned world-first Deck 3/4 Control, which are further detailed below.

Smooth Echo can be used to trigger echo via a chosen fader or pad automatically. This effect is an industry first and something that has not been witnessed on a mixer before. The echo can be achieved by first assigning the Smooth Echo effect to your choice of control (pad or fader). When the effect is turned ‘on’, the echo will be applied using the control that has been connected. The parameters to this effect can be modified and allow the user to create new sounds whilst scratching or finger drumming.

This is a world’s first and is a feature that allows up to four tracks to be played at the same time. The other Decks can be accessed via the touchscreen, where parameters including EQs, Pitch Bend, Hot Cues and more, can be modified to aid in creating live mash-ups of several tracks.

If Serato DJ is used, two additional features are unlocked, Deck Move and Dual Deck Control. Deck Move allows tracks from 1 to 4 and deck 2 to 3 be reassigned without pausing the sound and is an excellent feature for freeing up the mains decks. Dual Deck allows effect parameters and volume to be adjusted for two of the decks simultaneously, or to allow two tracks to be scratched at the same time.

The high-frame colour touch screen on the DJM S11 displays all the vital information at a glance and allows simple, fast access to significant controls. The aim of the interactive display is so the user can concentrate on the mix, and how the crowd are reacting, without having to stare at a screen for longer than necessary. It is also fully customisable, which means the layout can be changed to suit the individual.

When switching to the Touch FX screen, two effects can be controlled at the same time. A finger can trace the surface of the screen whilst the other hand can scratch using the crossfader, or finger drum on the performance pads. In the FX Setting Screen, four sets of effect types and parameters can be saved, and instantly recalled when required.
There isn’t a need for a laptop when using Touch MIDI, as it has four pages of presets that can control functions within the DJ Software. The controls are also MIDI mappable to add flexibility.

Scratch Bank is a new pad mode that allows quick access to scratch samples from four banks that have been pre-assigned in Serato DJ Pro by merely tapping a pad. Additionally, there is the option to load them from a specified starting point. In Serato DJ Pro, the Active Combo Pad mode means up to four different pad modes can be used simultaneously (two modes per channel, four pads per mode) which means more features can be combined.

There are 22 built-in effects in the S11, fifteen inherited from the DJMS9 and seven brand new ones, including a new Beat FX, Channel Fader Pitch and Helix. The effects are saved in four FX Banks which can be instantly triggered and can be edited via the touchscreen. Additionally, when one of the effects is in use, up to six more can be activated from the DJ software to create new and vibrant sounds.

The overall design of the mixer has been improved with the idea of making it more responsive when being used. There is a larger load button than the one on its predecessor, which allows for quicker track selection. The performance pads have also increased in size, which makes them easier to locate and use in battles.
The Magvel Fader Pro has been improved and is now more robust, as the rigidity of the knob mounting axis has been boosted in the vertical direction by 30 per cent, and a tougher coating around the crossfader area reduces wear on the top panel. The ultimate aim for these improvements is to allow the user to be more confident when scratching.

Under the hood of the DJMS11 mixer is superior audio technology that allows for greater sound clarity and power, similar to that of the industry-standard DJM-900NXS2. The DSP contains a 64-bit studio-quality mixing and dithering process, the master output features a 32-bit quality D/A converter, and there is a low-jitter clock circuit present.

The mixer features dual USB-A ports which allow direct connection for DJ controllers and other devices, two USB-B ports that allow for two laptops to be connected simultaneously and two CDJs can be connected using the HID mode, which negates the need for an external hub.

Plug and Play and MIDI Mapping

Rekordbox can be used directly out of the box, and the mixer also acts as a Hardware Unlock device, which means access is granted to Performance mode. It also allows for DVS control when the S11 is connected to a laptop that runs the application. Serato DJ Pro can be used straight from the box also without needing to obtain a licence key. A Serato Pitch ‘n Time voucher is included, which unlocks key shifting and key syncing with precise quality of audio. Finally, advanced MIDI mapping is available, which allows the user to assign controls to various functions within the DJ software providing even more user flexibility.

The DJM-S11 has been designed for effortless play, time-saving and allowing the user to concentrate solely on performances. It fits nicely into any setup, and the USB hub ensures direct and smooth connection options to CDJs and the DDJ-XP2. The mixer can be used with both rekordbox and Serato DJ Pro straight out of the box, so makes for easy plug-and-play capability. As its MIDI mappable, it can even be used with other available applications. Overall, this is one state-of-the-art modern mixer, great for scratching and battles, and one that certainly won’t disappoint.