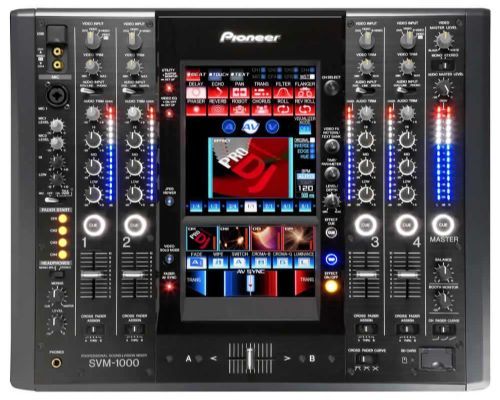 Pioneer are once again leading the way in Video products for DJ`s and VJ`s. The SVM1000 is the ultimate audio visual mixer, with full digital ins and outs, midi, video in and out and a huge touch screen with multiple audio and video effects.

the SVM-1000 is an audio and video mixer that finally allows DJs to unlock their true AV potential, and further blur the boundaries between DJs and VJs.

Designed for use with Pioneers’ DVJ-1000 DVD/CD decks, the SVM-1000 gives DJs comprehensive control by synchronising both audio and video elements of their performance.

Even audio-only DJs can easily add visuals synced to the music from the SVM-1000`s built-in visualiser capability.

Complete with LCD touch panel, an impressive range of effects and 96 kHz/ 24-bit studio sound quality, the MIDI assignable SVM-1000 functions in a similar fashion to our acclaimed DJM series – which for DJs mean s that the doors to full-on AV freedom are now fully open!

DJs and VJs have worked together to deliver immersive AV experiences for decades, and of course it is natural that the two art forms are so closely interlinked.

Developed with input from leading DJ and VJ artists this mighty mixer works perfectly in both audio and AV set-ups.

For many artists this mixer will be the missing link they have been waiting for. DJs and VJs around the world now have the potential to explore new avenues of creativity

Audio and video in each channel can be controlled in various ways (such as by fader or EQ), and this makes it possible to complete a synchronised AV performance via conventional DJM mixing methods.

What’s more, because there is a facility for sound-only or visual-only control, users can create performances according to their individual preferences.

When switching the video, the SVM-1000’s cross fader is capable of various effects such as FADE, WIPE and CHROMA-KEY. This presents boundless possibilities in terms of mixing, remixing or scratching at the assigned channel.

AV Effect Function opens up a new world of audio and video manipulation Within the SVM-1000’s 11-inch LCD touch panel (conveniently located front centre) is an AV Effect section, which enables the synchronisation of audio effects and video effects.

This function is capable of 30 patterns of effects on the audio and/or visual side, meaning that you can create countless combinations of effects. Each effect can be selected via an animated icon button for an easier (visual) understanding of the effect, thereby allowing DJs to instantly select the best effect for their performance.

# 1. AV Beat Effect: Automatically detects the tempo (BPM = Beat Per Minute) of the music and affects both audio and video in time with the beat.

# 2. AV Touch Effect: Enables a more sensuous use of effects because it allows users to touch and affect the visuals directly, as they appear on the panel. The mixer is loaded with 12 patterns of Touch Effects: RIPPLE, LENS, SPOT, RADIATION, CUBE, BLOCK, KALEIDO, TWIST, ZOOM, DROP, BLUR and DISTORTION.

# 3. Text Effects: Automatically detects the tempo of the track and displays text messages in sync with the beat. The SVM-1000 is equipped with 6 patterns of Text Effects: RANDOM, ZOOM, BLOCK, ROTATION, CRUSH and SLIDE. Messages are inputted via the touch screen’s built-in keyboard, but it is also possible to use an external USB keyboard.

JPEG Viewer Function: use still images from external memory sources This feature lets you call upon JPEG images (up to 8 files) from SD cards or USB memory for use in the mixer’s Still Image Sampler.

By using effects on still images, or mixing these with motion pictures or other stills, this function further expands the range of a creative performance when compared with a moving image-only show.

It also allows looping of JPEGs, such as logos of the event/venue/sponsors and DJ branding, to play automatically like a slide show.

Please note that this is an ex demo unit