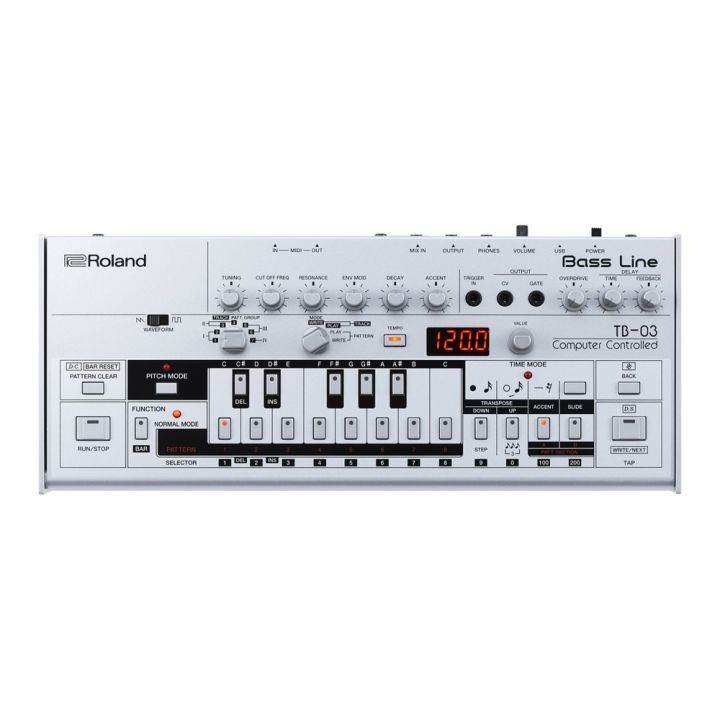 The Roland TB-03 is a remake of one of the most popular bass synthesisers ever created, the TB-303. The new TB-03 comes with several improvements which include a four-digit LED display, 5-pin MIDI ports, USB ports, and overdrive, reverb and delay effects allowing you to super-creative.

The Roland TB-03 bass synthesiser is a remake of the classic TB-303, a synthesiser that birthed the acid house genre and is one of the world’s most renowned synthesisers. The new TB-03 inherits the same layout and controls as the original 303 with the same classic sound and works in exactly the same way. Thanks to Roland’s super-advanced ACB technology you can recreate the classic sound of the 303; however, the TR-03 comes with several improvements that won’t be found on the original such as micro-USB port, 5-pin MIDI ports, and can even function as an audio interface. There is a new four-digit LED display that helps you program with more fluidity and accuracy, and the addition of overdrive and delay effect allows you to get ultra-creative.

This bass synthesiser comes with several improvements on the original 303 that bring the classic sound into the 21st century; these improvements include a four-digit LED display that helps make programming a more manageable task with even more detail and gives you visual feedback of the control that is being edited. There is also the addition of various effects such as an overdrive, delay, and reverb effects which work to dramatically alter the mood and tone of the TB-03 allowing you to go from smooth to spiky and squealing sounds. There are also some brand new functions that make programming patterns easier; these functions include step write, shuffle, and fine tempo control so you can get even more precise than ever before. The addition of MIDI and USB ports means the TB-03 can send and receive control information and connect easily to computer-based digital audio workstations.The TB-03 uses the same ACB (Analogue Circuit Behaviour) technology as the critically-acclaimed AIRA series and can accurately emulate the expressive, robust sound of its ancestor and even comes with some additional surprises. This bass synthesiser comes equipped with both saw and square waveforms as well as all of the rotary controls that helped shape the original 303’s unique character and includes controls for tuning, cutoff, resonance, envelope modulation, decay, and accent.

If you’re already familiar with the TB-303’s way of programming, then you will feel right at home when using the TB-03. The TB-03 features the original Pitch and Time writing modes as well as an all-new step sequencer mode which means programming patterns is a natural process. Programming patterns are enhanced with the addition of the LED display that shows the current step in the sequence as well as showing fine tempo values like 133.7 BPM. The internal sequencer can be triggered externally using the trigger input, and you can also switch between write and play modes without needing to stop the playing pattern which opens up a whole new world of creative possibilities for live performances.

The inclusion of 5-pin MIDI in/out ports and USB ports lets control information be exchanged with other instruments and devices; this makes the TB-03 a fully flexible controller especially when you make use of the CV/Gate output to control external analogue equipment and modular synthesisers. This way of controlling can work both ways; the trigger input can allow your external equipment to operate the TB-03’s internal sequencer. Once connected to a PC or Mac both audio and MIDI data can be sent through the USB port.

Thanks to the USB port the TB-03 can work as a fully functioning, high-quality audio interface giving you a simple and reliable way of recording directly into your favoured digital audio workstation. You can also keep your favourite settings and sequencer patterns safe thanks too via the USB data backup function. The TB-03 can run on four AA batteries, allowing you to be ready whenever inspiration strikes, alternatively the TB-03 can run on USB bus power.