Not only are there new Instruments and effects, but there is also a new AIR Vocal Suite that presents the ability to create, record and mix the vocals effortlessly directly inside the FORCE. Subtle pitch correction and modern auto vocal tuned sound can all be carried out via the Vocal Tuner, whilst AIR Doubler adds depth and dimension, and AIR Harmonizer instantly transforms a single voice sound into four-part harmony. Finally, the Vocal Suite offers built-in volume, delay, pan, and eq to add to vocal arrangements easily. 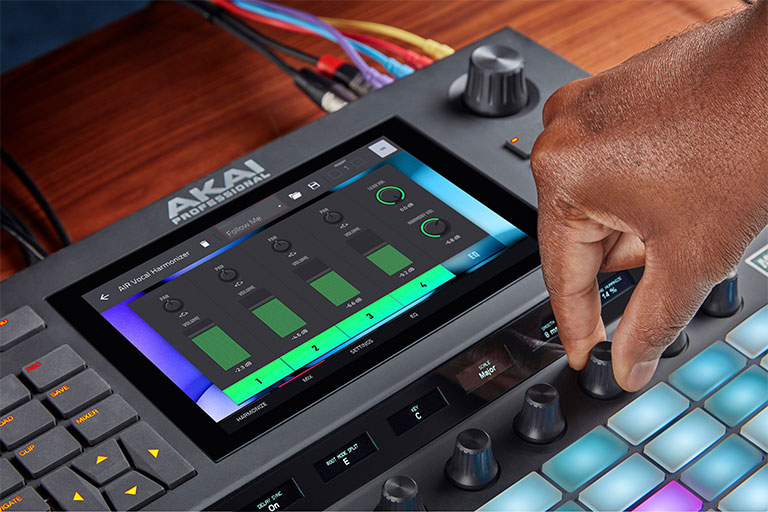 As a result of the Disk Streaming, the hardware connectivity of the FORCE can be expanded using the Class Compliant USB Audio Interface Support. Using one USB cable, 32 audio inputs and outputs can be linked up to and from the FORCE.

Drum and Keygroup engine updates enhance performances with a new portamento function for gliding notes and percussion. Additionally, sample shapes can be perfected with a dedicated pitch envelope, Akai Sample Tail can be used to smooth out drum breaks, and chops and ten drum pad effects including Bitcrush, Ringmod, Lowpass, Tubedrive and more can be accessed.

With the new FORCE 3.1 update comes massive workflow enhancements in the form of new functions to Buses (Submixes/Returns/Masters). More control and creativity options have been added, including the workflow on Buses following the same Playback, recording and editing of automation as other tracks. Submix and master tracks can be controlled using ‘Select’, ‘Rename’ and ‘Clips’ functions whilst creating an automation on the fly. In addition, MIDI integration is expanded through loading and exporting MIDI files to and from FORCE and assigning the FORCE’s parameters to a third-party controller for even more control options.

This new firmware update propels the FORCE hardware unit into a modern music era. It makes for a powerful standalone music production unit, allowing for ultimate performance capabilities, ground-breaking features and functionality, along with new sounds and sound processing skills.